The best self-defense is to avoid encounters however when that’s not possible, you don’t want to be caught without a weapon.

Having the means to defend yourself and your family is essential for survival.

This article covers the various survival weapons you can use for self-defense in a disaster scenario, including those you can:

Why Should I Think About Survival Weapons?

Sometimes all it takes is showing your opponent you are armed to deter them from attacking, but in case you are forced into combat you’ll want to be armed with a weapon you’re comfortable with and skilled at using.

When considering the options below, choose those that are best suited to your particular situation and that you will have time to practice with to develop your skill level.

Survival Weapons You Can Buy

There are plenty of suitable and highly effective survival weapons that can be purchased. Not only will this save you the hassle of fabricating your own, but also you’ll have the time necessary to practice and become proficient with its use. Our top choices for store-bought survival weapons are slingshots, tomahawks, knives, billy clubs, and firearms.

Although knives are among the most basic of survival weapons, they require a great deal of skill to wield effectively. Few people have the time to invest in becoming proficient with using a knife, and therefore it serves better as a backup weapon than as a primary. Our fixed blade knife of choice is the Ka-Bar Becker 22.

For a more compact option, opt for a folding knife with that has an open-assist feature, providing quick, one-handed operation and carries a high intimidation factor such as the Kershaw Tanto.

Slingshots are a great choice for a survival weapon as they are inexpensive and ammo can easily be scavenged. We recommend The Scout Hunting Slingshot as the best all-around slingshot which can also be an effective hunting tool. For more details, read our guide to choosing the best slingshot for survival. 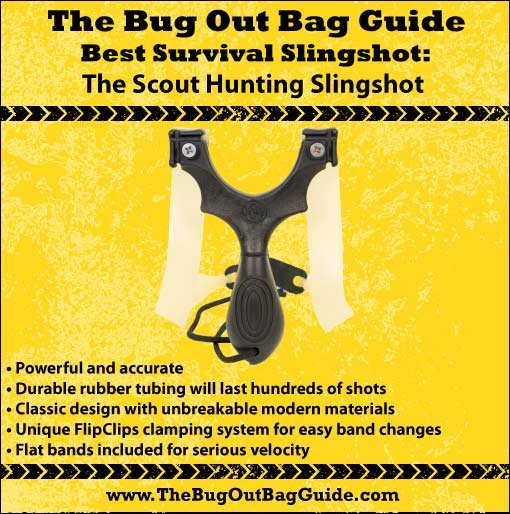 The benefit of a tomahawk is that it functions as both a tool and a weapon, giving you a two-for-one option that will help keep your packing to a minimum. Besides its obvious use as a bludgeoning weapon, a tomahawk can prove quite useful in scavenging as it can help to open containers and other places where food might be kept. It also functions well as a search and rescue tool. The CRKT Kangee Tomahawk is our tomahawk of choice. Check out our guide to choosing the best tomahawk. 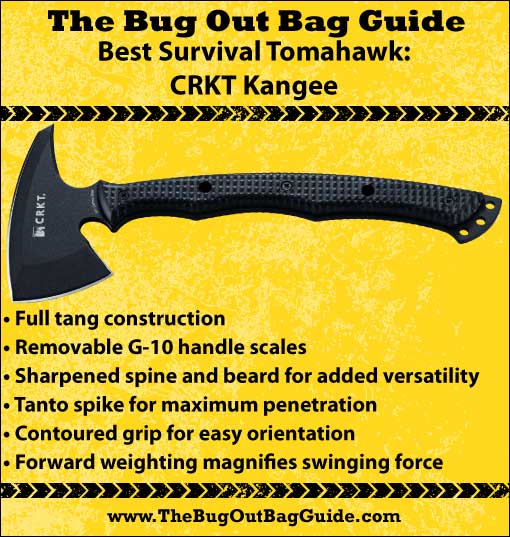 Pepper spray or a stun device are very effective weapons that can stop an attacker in their tracks. These options are especially useful for those that don’t have the brute force to use other types of weapons effectively since they can used from a distance and don’t require a substantial amount of strength to inflict damage.

These weapons are very effective in the hands of someone with adequate strength, agility, and skill.

Firearms, America’s weapon of choice – and for good reason!

In most states, firearms are relatively easy to purchase legally and are extremely effective at both intimidating and harming would-be attackers.

Firearms are also desirable if you or members of your bug out crew don’t have the strength to wield a brute-force weapon – it is skill, not size, that counts with firearms.

However, just like any other survival weapon, a firearm requires practice to gain accuracy (especially under tense situations when adrenaline is pumping) and ammo must be hoarded or scavenged. Firearms also require periodic maintenance to ensure they stay in working order. 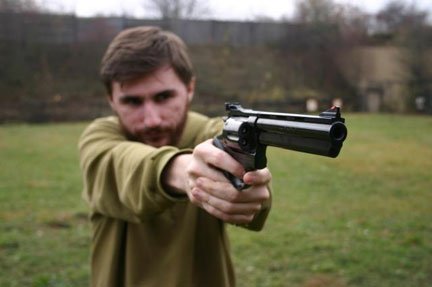 Survival Weapons You Can Make

There are myriad items at your disposal that can instantly become a weapon if need be – most of which are easy to make and relatively inexpensive. Recent civil uprisings in the Ukraine provide a great case study in how deadly homemade weapons can truly be.

To see how sticks, bats and sledgehammers were able to topple a Presidency, take a look through these pictures at Wired.

The three types of DIY weapons we’ll be discussing in this article are:

Each can be deadly in their own right, so make sure to choose the type of weapon that you feel most comfortable with.

To effectively wield a bludgeoning weapon, you must be in close contact with your attacker and have a significant amount of upper body strength – delivering a disabling blow requires a tremendous amount of force. If this sounds like the type of weapon you’d do well with, we recommend using a club, war hammer, tomahawk, or flail.

While a club is one of the easiest survival weapons to make, it is no less deadly than any other and can inflict serious injury on an attacker. You can create an effective club by modifying a baseball bat, garden tool handle, or any length of wood, metal or piping. You can increase the destructive power of your blows by adding nails or metal scraps to the end of the club or by building a weighted club with a stone embedded in the end. For ideas on how to build an effective club, check out some examples at The JB Bardot Archives.

A war hammer can be easily assembled using inexpensive plumbing materials and works well for breaching doors and cars, as well as for combat. To create a war hammer, use a length of pipe with a t-splitter on the end and fit it with reducer couplings and plugs – no welding required. For a detailed explanation, see this YouTube video on assembling your own war hammer.

A tomahawk can be used both for chopping and throwing. You can easily make one by splitting a piece of wood and inserting either a rock or piece of metal and tying it together with leather cord or braided plant fibers. You can make your tomahawk even more deadly by sharpening the end of the handle so that it can double as a spear or pry tool. For a more advanced tomahawk, see this YouTube video which explains how to make a tomahawk from lawnmower blades (this requires welding).

A flail is easily crafted by fastening a chain with a spiked ball to the end of a stick or bar. You can also make a dive flail, which has a spiked ball at both ends.

There are a multitude of materials that can be used to craft an effective – and deadly – blade, including bone, stone, glass and scrap metal. Blades are an efficient tool for slicing or puncturing your attacker but are notoriously difficult to master. Before relying on a blade in a life-or-death situation, make sure you try it out and can effectively wield it in the heat of the moment.

The most common type of blade is a fixed-blade knife, which can be made with materials from around your home such as saw blades. M40 has a whole article on fabricating a homemade fixed-blade knife for under $1, which you can read here. If you need to arm yourself on the fly, Hedgehog Leatherworks has a great video on choosing the best stones to craft into tools, or survival weapons as the case may be.

Another viable option is to create a spear or ‘rabbit stick’ by sharpening a shaft that is at least five feet long and attaching a sharp point to the end made from either metal, stone or glass.

With projectiles, you can inflict damage while keeping a distance between you and your attacker, making them the ideal weapon when stealth is your objective. However, to cause serious damage you must be highly accurate, which requires a fair amount of practice. The following are some of our favorite projectile survival weapons:

Want even more info on projectile survival weapons? CLICK HERE NOW to check out our in depth article!

Survival Weapons You Can Scavenge

If disaster strikes and you don’t have survival weapons with you, there are weapons that can be scavenged after the fact. If you find yourself scavenging in a hostile situation, be sure to thoroughly scout the area beforehand and have a group of people with you that can provide enough hands to carry back what you need.

In an urban survival situation, the following can be useful sources of weapons and ammo:

When scavenging for survival weapons, try and locate the following:

When scavenging for ammo, try and locate the following:

Investing the time and effort to either buy or make survival weapons that will best serve you is an essential part of the prepping process. Whichever weapon (or weapons) you choose, make sure you can practice with them and they are well-suited to your survival needs.

As an example, a longbow can serve as a great weapon for defending your home perimeter, but probably won’t be useful as part of your get-home-bag. As important as arming yourself is developing the skills to properly wield your weapon in combat, so always take time to practice.

It is also worth considering learning and practicing some form of unarmed self-defense.

Do you have a survival weapon that you plan on using? Do you have an idea for one that would be easy to make or scavenge? Let us know in the Comments Section below, thanks!

15 comments on “Survival Weapons: How to Make, Purchase, or Scavenge Your Self-Defense When SHTF”