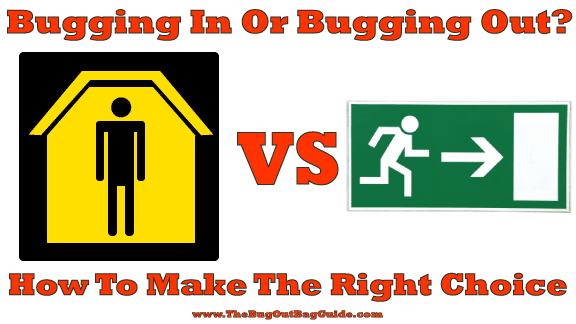 Bugging out is undoubtedly one of the most popular topics in survival literature, as well as in online discussion forums.

Assembling a bug out bag is something akin to a rite of passage among preppers, and we love to critique each other’s kits.

We talk endlessly about bug out locations (BOLs) and bug out vehicles (BOVs).  Yet, for all of that discussion, one rather critical part of the plan often lacks attention.

We talk a lot about HOW to bug out, but we often forget that sometimes bugging in is the required course of action.

First of all, I firmly believe that bugging out should be considered your last option rather than your primary plan of action in most disaster scenarios.

For most of us, home is where we have the bulk of our supplies and hitting the trail with even a fraction of what we have stockpiled would be an arduous effort, to say the least.

Sure, we can fit all sorts of supplies in our vehicle but what if motorized travel isn’t a viable option?

Depending upon the nature of the crisis, streets could be impassable due to debris or even manned roadblocks.

That said, even though it isn’t the best option in many cases, bugging out is still an important part of your overall disaster planning.

Deciding When To Bug Out

Deciding when to bug out will largely be a judgment call, of course.

There are many factors that may come into play, and we certainly can’t plan ahead for all of them.

However, there are a few key indicators, call them red flags if you’d like, that should get you thinking that it might be time to beat feet and head for a more secure location, at least for the immediate future.

Civil unrest in the immediate area

Particularly if you live in an urban or suburban area, this is a big clue that things are headed south and you might not want to stick around.

As I’ve often said and written, frequently the biggest threat in a crisis is other people.

If you are made aware of looting and riots happening in your immediate area, you may want to load up the family truck and head out of town for a bit.

Now, a word of caution, here.

I cannot stress enough the importance of obtaining reliable information on what’s going on around you.

It is one thing if your neighbor tells you they just got back from the grocery store where he saw massive crowds stripping the shelves bare.

Another thing entirely if he tells you his sister said her best friend’s cousin was told by a random guy on the street three cities over that there were rumors of rioting happening.

This one reason why a working radio is a critical element of your survival gear. Depending upon the nature of the disaster, going online with a phone, tablet, or laptop might not be a viable option. A crank powered radio, ideally one that can tune in shortwave transmissions, might be the only way you can gather information about the world at large.

Bear in mind, though, recent history has shown that reporters quite often get as much wrong as they get things right.

The common statistic tossed about is that the average grocery store only has enough stock on hand to last three days at normal buying volume.

That’s actually rather misleading as it depends upon the items in question. Food items will go quickly. Toiletries, maybe not so much.

Either way, if the grocery store has to shutter their doors because they’ve run out of stock on most things, people are going to get rather antsy. 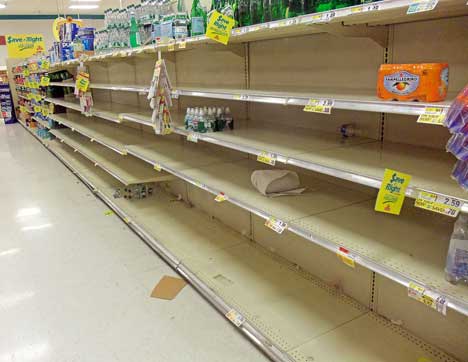 We live in an age of immediate gratification. We’ve become accustomed to satisfying our wants without thinking much of it. In fact, people get very upset quickly if the store doesn’t have the item they traveled there to purchase.

“What do you mean you sold out of The Walking Dead, Season 87?!”

They’ll demand to see a manager, who is just as powerless as the store clerk, and pitch a holy fit because the store dared to sell their entire stock of the item without so much as a thought for this important-in-their-own-mind customer.

Now, imagine it isn’t a DVD set, but food.  And rather than just being offended, the customer is starving… and has three kids at home who are just as hungry.

Yeah, you probably don’t want to hang around to see how that plays out.

As we’ve seen happen time and again in major disasters, emergency services such as fire, police, and rescue can become overwhelmed.

Understand, I have the highest respect for those brave men and women who, when a crisis hits, run toward rather than away from danger. But, they are only human, and there are only so many of them to go around.

They can’t be everywhere at once, right?

Because of the limited resources, and no matter how large the department is, there are a finite number of emergency responders available at any given time, what’s called triage is going to take place.

Basically, decisions will have to be made about which emergencies are more important than others.  Of course, dispatchers do that every day. A massive pileup on the highway is going to take precedence over a lost dog.

However, in the wake of a major disaster, there will most certainly be lives lost simply because of a lack of emergency personnel available.

Making The Call To Bug In Or Bug Out

The most important thing to remember is to trust your instincts.

If your gut is telling you it is time to get out of Dodge, listen to it.

Our subconscious minds often come to solid conclusions well before our active minds can muddle through all of the information. Bugging out can put you and your family in significant danger, whether from the actual crisis at hand or the people reacting to it in a less than an ideal manner. But, the danger of staying at home might be greater.

How to Prepare for Bugging In

To make sure you’re prepared for a situation that requires bugging in, read The Ultimate Guide to Bugging In: Preparing Your Home for a Disaster.

This article was written by Jim Cobb who runs SurvivalWeekly.com.

Jim is the author of several books on preparedness and has most recently written “Urban Emergency Survival Plan: Readiness Strategies for the City and Suburbs,” which is a comprehensive look at disaster planning for urban and suburban dwellers.  Find out more about this great resource here: 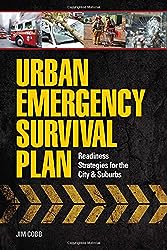