After mentioning the The Wartech 8″ Assisted Open Folding Tactical Survival Pocket Knife in our article about the best survival pocket knives we have gotten several requests for an in depth Wartech knife review.  We have put this Wartech knife through the paces and come out with some interesting feedback on it as a practical survival tool. 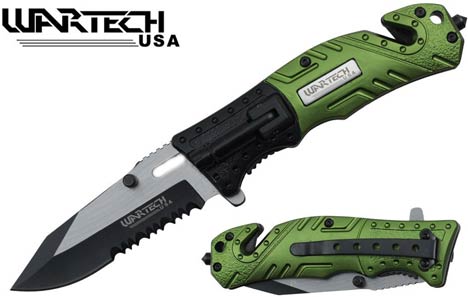 The Wartech 8″ Assisted Open Folding Tactical Survival Pocket Knife has an aggressive styling with futuristic metal handle and two tone blade. This tactical folder includes several accessories which you’d expect to clutter the overall appearance, but are nicely low profile including a glass breaker, seatbelt cutter, belt clip, and LED light.  The knife feels nice in the hand and seems to have a better build quality that you would expect for a knife at this price point.  The features that jump out are the smooth assisted opening mechanism and aforementioned LED light, both add a lot overall and are discussed below in detail.

The Wartech 8″ Folding Tactical’s blade is about 3.75 inches long, with a clip point and partial serration.  Out of the box, this knife has a nice sharp factory edge that cuts effectively thought cordage, nylon and wood, as you would expect from a Wartech knife.  It has a 1065 “Surgical” blade made from plain carbon steel (.65% carbon).  This type of steel has less corrosion resistance and edge retention than stainless steel would but is however very easy to sharpen.  Overall the Wartech 8″ Folding Tactical’s blade is sharp out of the box and will perform well in most cases.  If this particular Wartech knife is used as an everyday work knife it will require maintenance such as sharpening and corrosion protection due to the type of steel employed in its design.

Put simply, opening the Wartech 8″ Folding Tactical is sweet.  The assisted opening mechanism causes the blade to fly open at light pressure on the opening lever for very easy ambidextrous, one handed opening. This feature is a real highlight of the Wartech 8″ Tactical’s design and it is worth its low price just for this functionality.  When locked open, the Wartech knife feels solid and stable with very little wiggle between the blade and handle.  The mechanical down side an assisted opening mechanism and stable blade lock is that closing the Wartech 8″ Folding Tactical is tight and takes two hands.  This may be preferred by some users as a two handed close makes it near impossible to accidentally close the knife while in use.

The Wartech 8″ Assisted Open Folding Tactical Survival Pocket Knife comes equipped with several nice accessories that make it a highly versatile emergency tool.  Most of these features are not found on other knives at this price point, which is a great aspect of this folder.

The Wartech 8″ Folding Tactical has a side-mounted, articulating LED light.  The light is small and low profile, but bright enough to illuminate your immediate area in a pinch.  The LED can also be folded flat against the handle so the beam is pointing straight down the blade.  This is incredibly useful when cutting in the dark as it aligns the light with whatever you happen to be slicing or piercing.  This is a really nice feature that adds versatility to the Wartech knife. 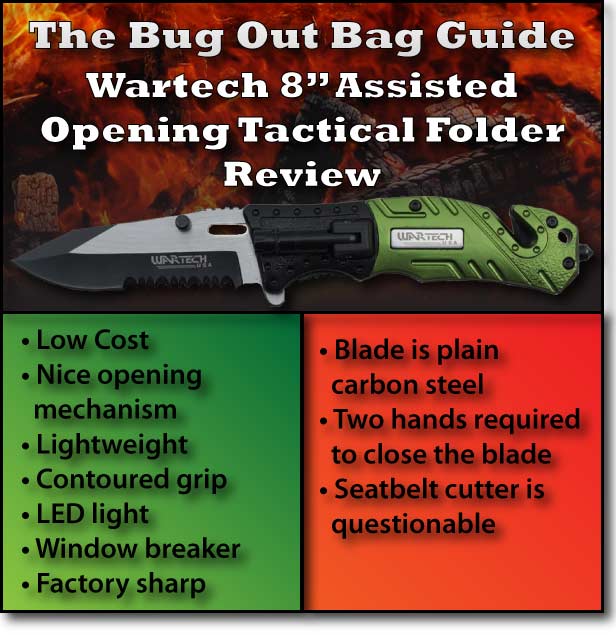 The Wartech 8″ Assisted Open Folding Tactical Survival Pocket Knife is a great tool to keep in your car, your bug out bag or anywhere you need a versatile, secondary knife.  It is worth noting that the type of steel used in this particular Wartech knife offers a trade off of ease of sharpening for lower corrosion resistance.  Its many features packed into a compact, ergonomic folder make it best suited as a back up, but for the low price you can buy several and stash them in your workplace, home, garage, vehicle, and bug out bag.

Recommendation: Buy one or more.