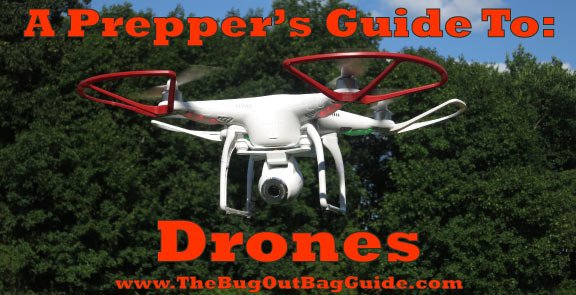 Inspiration for new preps can come from unexpected places sometimes.  This happened to me when I was last visiting my parents and had the opportunity to take my Dear Old Dad’s quadrocopter drone for a test flight.

The drone, a Phantom 2 by DJI was a blast to fly around.  It also sported an HD camera that took high quality footage of us and the surrounding area.  It was surprisingly easy to control, even for a novice (me).  Watching the drone soar got me thinking, are there any applications to prepping that a drone could be used for?

How Would A Prepper Use A Drone?

I gave it some thought and came up with a few specific situations where having a drone on your side would be handy.  Most of these center around bug in scenarios as no one is going to want to haul around a power source or copter when bugging out.  In particular, using your drone to patrol or inspect your perimeter or the surrounding area would be a huge advantage to have.

Note: This is not intended to be an exhaustive overview of drone technology or all of the models that are available.  But, if you are planning on bugging in, it may be worth giving a drone some thought.

Your first line of defense in protecting your premises will be to build a perimeter security system that will alert you to the presence of trespassers and help you to prepare for any conflict – providing you with the upper hand defending your home.

In addition to this, having a drone on hand to inspect damage or investigate a disturbance would be a major advantage. While the use of drone technology for surveillance dates back to WWI, only recently has it become accessible for private use. With fitted cameras, sensors, and state-of-the-art flight capabilities, drones are showing that their usefulness extends well beyond simply serving as a hobby for aerial enthusiasts and photographers.

What Is a Drone?

Any unmanned aerial vehicle (UAV) or remotely piloted aircraft (RPA) is considered a drone. The majority of commercial drones are multirotors, with the most popular being quadrocopters (4 rotors). Most modern drones can be fitted with a camera to provide the operator with a bird’s eye view of the flight path, and some modern commercial drones come equipped with cameras already.

Drones are not merely military devices that function as insanely fun toys for the masses. They also have practical commercial applications including monitoring livestock, pipeline security, road patrol, search and rescue, wildfire mapping, videography and anti-piracy. As drones have the ability to pursue a manually-operated or automated flight pattern, they make ideal tools for homeowners to safely surveil their property without putting themselves in harm’s way.

Additionally, drones can be fitted with a variety of supplementary features including speakers, tasers, mace, and infrared or night vision cameras. For some models, flight paths can be monitored through smartphone and tablet apps.

Effective perimeter security allows you to monitor what’s happening around your property from the comfort of your home or shelter and provides you with advance warning of any trespassers, giving you the upper hand.

Depending on the cause and length of your bug in situation, your property may become a target for other survivors, desperate to take your supplies by any means possible. When determining your security needs, consider your location in respect to its proximity to civilization and roadways, as the more accessible you are to others, the more of a target you become.

Other factors to consider when planning your perimeter security include the following:

Why Use a Drone For Perimeter Security?

In terms of perimeter security, drones provide several advantages over mounted cameras or simply patrolling the property yourself, including mobile video surveillance, remote control and stealth.

Unlike a mounted camera, which is fixed on a designated area, drones are mobile and provide an unlimited field of view. The real-time video surveillance capabilities of a drone provide the ability to immediately assess whether a disturbance is a threat or welcome members of your team.

The ability to operate and control the drone from a distance not only keeps the operator out of harm’s way, but also facilitates the surveillance of large areas in a short amount of time and of areas that would be treacherous to travel by foot.

Drones are generally very quiet and have long range view capabilities. Additionally, drones cannot be avoided or tampered with as can a mounted camera.

One drawback to drones is that, yes, they can be shot down by an intruder. But most people would much rather lose their drone than their own life.

What Type Of Drone Would A Prepper Buy?

You can find drones that sell for as little as $50, but if you want a durable, top-rated model, you’ll need to spend at least $1,000 or more. Drones can be purchased ready to fly or in kits that you assemble. If you plan on adding several of your own features, a do-it-yourself drone is probably the best option; in fact, several brands offer a modular design that adapts well to add-ons.

When purchasing your drone, consider the following:

Look for drones with the following features:

Here is a video taken by drone to give you an idea of the scope and range of what an operator can see when in flight:

What Features Should I Look For In a Perimeter Defense Drone?

There are a variety of different features that can be added to drones, the best ones for you depend entirely on your situation and particular circumstances. For instance, drones come with varying levels of user control, with the most extreme being completely autonomous drones that patrol without any human interference.

Depending on your needs, an autonomous device may be ideal or you may want some level of manual operation to check on specific disturbances.

When choosing a drone for perimeter defense, here are some useful features you should consider:

OK, So Which One Should I Choose?

The ‘best’ drone for you depends entirely on your particular needs; what is an optimal choice for one person may not necessarily serve the needs of someone else. The following are our top drones picks along with the relative benefits of each, review each keeping in mind your particular circumstances to determine which would be the best fit:

What Else Should I Consider Before Investing in a Drone?

Remember that in a bug-in situation, power will be a scarce resource. As drones are battery powered, battery life should be a top consideration as well as having an alternative power source at your bug-in location. For instance, in the case of power grid failure, drone surveillance would be rendered useless without some other means of providing power.

Another consideration to keep in mind is government regulations regarding drone usage. As drones are an emerging technology, the FAA is drafting regulations concerning their usage. The most recent information states that a UAV (drone) must:

In some situations, you may also need a license to operate one. While these regulations will be of little concern in a SHTF situation, be aware of them now to ensure you stay in compliance while practicing with your UAV.

Drones can be an excellent choice for perimeter security but involve a significant financial investment and require a decent amount of electrical and aerodynamical knowledge to maintain. Drones are also highly dependent on having a readily available electrical power source, an option that may not always present itself in every bug-in scenario. If you are considering using a drone for perimeter security, it is also important to keep an eye on the development of FAA regulations, which are only in the early stages.

The technology to remotely surveil your property and protect your family and supplies from intruders is here now, and it will only continue to improve. If you have a large property and are planning to bug in, a drone may be a smart investment. Always remember, when it comes to survival, chance favors the well-prepared.

Have you ever owned or operated a drone? Would you consider using a drone for perimeter defense? Share your thoughts with us in the Comments Section below, thanks!

5 comments on “Drones: A Prepper’s Guide”