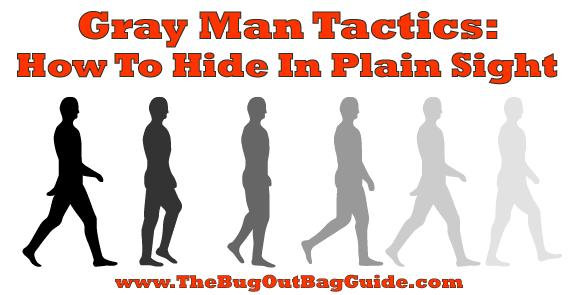 The gray man theory is a way of disappearing into the crowd so you can move unnoticed when disaster strikes. The idea is that you can conceal your preparedness by blending in with the crowd before or during an emergency.

While it is generally referred to as the ‘gray man theory,’ this theory can, of course, be applied to anyone, man or woman, of any age, who needs to blend into a crowd amidst a disastrous situation to conceal the fact that they have survival skills and/or are carrying tactical gear.

When you think of ‘blending in with the crowd’ it’s generally a negative, right?

Nobody wants to be just like everyone else. You want to be unique, to stand out – that is, until there’s an emergency and you’re the only one prepared. As a prudent prepper, you’ll be ready when disaster strikes, but what will everyone around you be doing?

In states of panic, people become desperate, and desperation can lead people to do whatever it takes to stay alive – at this point, you certainly don’t want to be singled out as the one person prepared for survival.

Why Use the Gray Man Theory?

There are lots of advantages to blending in with the crowd when disaster strikes.

For starters, by not drawing attention to yourself, you’ll be able to move more quickly and easily through the crowd without alerting others to the fact that you are prepared to handle the situation.

Also, by blending in and appearing to be among the unprepared, you are less likely to make yourself a target of those in desperation who may try and take your survival gear off you by force.

The gray man theory is really about protecting yourself and your family by concealing the fact that you are indeed prepared to survive in the face of disaster.

The Benefits of Being a Gray Man

In a true disaster situation, your primary objective will be to move yourself and your loved ones as quickly as possible to a safe place – be that your home or bug-out location.

In a disaster, everyone around you will have the same goal – get somewhere safe – but most will not have a sound plan in place, leading to frantic behavior and desperate attempts for survival.

In this situation, disappearing into the crowd and not drawing attention to yourself or your state of preparedness can greatly increase your chances of survival.

As most around you will be unprepared for disaster, you will undoubtedly feel the urge to help those in need. However, your number one priority needs to be your own survival, and you should only help others if you can do so without endangering yourself.

By blending in, or becoming a gray man, you will be less likely to be approached by others seeking assistance and, more importantly, less likely to be targeted by opportunists looking to prey on those with the forethought to pack essential items for survival situations.

How To Be a Gray Man

This is the concept behind the gray man theory, and it sounds simple enough, but execution can be challenging.

This guide will cover the basic concept behind the gray man theory and provide some key tips and tricks for effectively making yourself ‘invisible’ in a disaster scenario.

Steps to Becoming a Gray Man (or Woman)

The ultimate goal of becoming a gray man or woman is to camouflage yourself into appearing as though you are just part of the crowd to prevent others from identifying you as a potential gold mine of supplies or information. By exuding confidence and preparedness, you will draw in opportunists who will attempt to capitalize on your resourcefulness to the detriment of your own survival.

To conceal the fact that you are prepared with survival gear and skills from others, there are four key areas you will want to focus on: how you act, how you move, how you look, and how you carry your gear.

The key to acting as a gray man is to appear average and non-threatening. Be careful about what you say and to whom you say it – being known as strongly antagonistic or too outspoken about your political beliefs can lead others to make assumptions about you and mark you as a prepared individual.

Maintain conversation topics within the norm of the group. If small talk seems to be the normal thing to do, engage with others to not draw attention to yourself.

While a good understanding of your surroundings is paramount in a disaster, be careful to play down any attempts to scan areas for escape routes or possible problems with security. This type of behavior will be noticed and lead people to question what you’re looking for, or worse, what you’re trying to protect.

One important skill to learn in adapting a gray man persona is maintaining your privacy without appearing overly private or obviously standoffish. When speaking with others, keep eye contact to a minimum as someone is more likely to notice you if they look in your eyes. Even brief eye contact when passing on the street can form a connection, making you more memorable than those around you.

Knowing the local landscape can be a tremendous advantage as the better you know local streets and landmarks, the better able you will be to navigate them and alter your route to avoid troublesome areas. When moving, appear as much as possible to go with the flow, walking with purpose but not urgency. Any rapid motion will draw attention to you and raise suspicions as to your motives.

When navigating a crowd, make gradual progress – cutting through a sea of people at sharp angles will draw attention to your movements and make you appear suspicious. Whether others perceive you as a savior or threat, either one can slow you down.

Unless it would impede your own safety, always appear to follow the herd. For instance, if everyone around you turns towards an explosive sound and gasps, join them. You don’t ever want to be the one person who is unaffected by an out-of-the-ordinary event.

If you need to break away from the crowd, try and make your exit alongside a small group of people, keeping enough distance so that they know you’re not with them but close enough that you don’t appear to be alone, which makes you appear less vulnerable.

When observing your surroundings, be as discreet as possible. Leverage your peripheral vision as well as decoy objects, such as a piece of paper, to give the impression your attention is focused on the object as you survey the area. If appropriate, wear reflective sunglasses that hide your eyes, allowing you the freedom to scan rapidly without drawing attention.

If you need to engage in activities that will make noise and draw attention your way, try to take advantage of predictable noises to help mask the sound of any breaching you may need to do. Predictable noises include ‘white’ noises that people are accustomed to hearing and therefore raise little suspicion.

For instance, wait for a loud bus to pass before climbing into a dumpster or synchronize busting a window with a loud siren. If you need to get into a building, choose a door near a noisy HVAC condenser. These preparations may take a little bit of extra time to execute, but those few moments of patience will ensure your activities go unnoticed and may save your life.

It goes without saying that when trying to appear less prepared than you are, camo prints or other outwardly tactical-looking clothing are not the best choice, unless of course, you are in a situation where that type of dress is the norm, such as a hunting trip.

While you don’t have to dress head-to-toe in gray, subtle color choices blend best into crowds and make it easier for you to move unnoticed.

Ideally, you will want to keep any tactical gear concealed. This means packing your pockets and bags strategically to allow for quick access to key items. Reflective objects and bright colors will draw visual attention so ensure items such as your knife are tucked inside your clothing or bag, not hanging from your belt.

Avoid having any reflective materials or highly visible colors on your clothing and accessories, as well as any large text or memorable insignia. Any focal points can draw attention to you and hinder your attempts to blend in.

If possible, carry an additional item with you that can instantly change your look, such as a hat, sunglasses, or jacket, as this can be quite helpful. If someone does happen to peg you as a target, you can use the item to slip under their radar as they scan for you in a crowd.

One last word of caution – be mindful of the way you smell. Yes, smell. Believe it or not, scent is a major memory trigger, so try not to have a noticeable scent about you when trying to blend in.

How You Carry Your Gear and What You Carry

The simplest solution to carrying your gear unnoticed is to find a discreet every day carry bag that blends well with your typical daily routine. Backpacks and messenger bags commonly seen on commuters are good choices as these tend to be less obvious. You can also find pocketbooks with compartmentalized interiors that can make it quick and easy to access your gear.

Another good choice that lends itself well to blending is a jacket or vest with a streetwear outward appearance but hidden storage on the inside. Pants with pockets, especially cargo pants, are excellent for storing gear but may not be the most appropriate choice for people who work in an office with a formal dress code.

The gear you carry with you daily should also be discreet if you want to be a gray man. For example, for self-defense, you may opt for a tactical pen or a discreet folding knife such as the Boker Subcom folding knife, which can even double as a money clip.

A compact flashlight such as the Fenix E05 is so compact it can easily be carried on a keychain without attracting.

In the immediate aftermath of a disaster or in a post-apocalyptic scenario, the ability to conceal yourself as a gray man can be an extremely useful survival skill. The last thing you want is for all your time and effort put into prepping to be for naught by having your supplies taken off you by someone less prepared and more desperate.

To improve your gray man abilities, observe the way people dress and act as you go about your day – what stands out, what makes various people noticeable? This can help you hone in on the objects and behaviors that draw attention.

Combining this knowledge with the four key steps to becoming a gray man will put you well on your way to being able to ‘disappear’ into any crowd and increase your chances of survival when disaster strikes.

Do you have any thoughts on the gray man theory? Have you experienced a situation where you needed to conceal your preparedness? Let us know your thoughts and experiences in the comments. Thanks!

67 comments on “Gray Man Theory: The Art Of Blending In During Disaster”