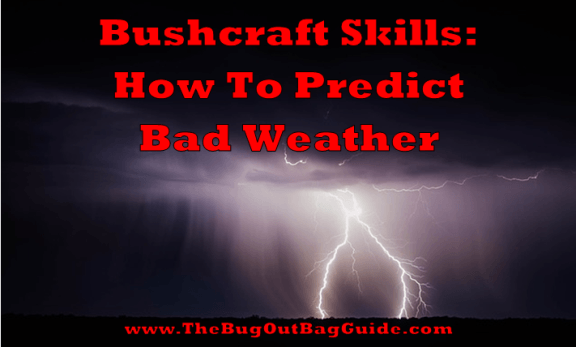 Typically we count on weather services and electronic devices to know what to expect from the sky. We may alter travel plans, make a quick trip to the store, or simply pack an umbrella in reaction to an impending storm. However, these services will likely come to a halt if disaster strikes and alternative means of monitoring weather conditions will be necessary. For those that opt to head for the hills, it will become vastly more important to know how to predict the weather in the wilderness.

Nature itself provides many clues as to what is in store. The clouds, plants, animals, insects, and the moon have been used for centuries to predict precipitation, droughts, and floods. Farmers, fishermen, sailors, and others who spend long periods of time outdoors, and whose livelihood depends heavily on the weather patterns, have devised ways to foresee the weather in order to prepare themselves.

Having the skills to read the warning signs that nature provides has short-term and long-term benefits that can greatly increase your chances of survival in a bug-out scenario. Whether a major storm is brewing and you need to prepare to build a shelter in for the day or if the likelihood of flooding doubles and you need to reconsider your location for the season, learning how to predict the weather using nature is a valuable survival skill.

Observing The Sky To Predict The Weather

The most intuitive way to predict the weather is to look to the sky. The clouds, wind direction, air pressure, and even the moon are directly related to incoming weather. Paying close attention to the changes in the sky and knowing how to interpret what you see gives you advance warning of what is to come and enables you to prepare.

There is an old saying, “Red sky at night a sailor’s delight. Red sky morn, sailors take warn.” At sunset, the red sky is caused by sun rays passing through dust particles which accumulate at the forefront of a high pressure system. However, in the morning a red sky occurs when a low pressure system carrying moisture is on the way. Therefore, a brilliant red sunset usually precedes a clear day but a red sunrise is a warning that a storm is coming.

Another colorful way to predict the weather is the formation of rainbows. In the northern hemisphere, a morning rainbow in the east indicates rain is on the way, as weather generally moves east to west.

Cloud identification is a science in itself but there are some simple indicators that can prove very useful, especially when trying to predict the weather in the wilderness.

White, fluffy clouds sitting high in the sky are non-threatening as they pass overhead. When the cloud cover is low and dark, a storm is building and appropriate measures should be taken to prepare your camp. Gathering extra firewood and storing it in a protected location will ensure that you have dry fuel to burn during and after the storm.

To give yourself more time to prepare, there are two easily identified types of clouds that form prior to storm clouds: mare’s tails and mackerel skies. Mare’s tails are wispy cirrus clouds that are somewhat hazy and undefined, as the tail of a galloping mare. The same conditions that cause them to form also cause airplane trails to linger in the sky.

Mackerel skies are altocumulus clouds and are also a sign of rising moisture levels. Independently, these each warn of rain coming within a few days, but seen together, rain will typically fall within 24 hours.

Though air pressure is less noticeable than cloud cover, it is a very dependable indicator of incoming weather conditions. Low atmospheric pressure leads to cloud formation and precipitation. High pressure systems are associated with rising air and clear dry skies.

What The Wind Tells About The Weather

Wind is named for the direction it comes from, so an easterly wind blows from east to west. A gentle prevailing wind or light, variable winds are signs of clear weather. Strong winds occur when two fronts with different temperatures meet, and usually mean that a storm is forming.

An awareness of the surrounding climates will also help you read the wind. For instance, if a desert lies to the east of your location, wind coming from the east will typically carry dry, warm desert air. Mountains also play a role in that air flowing over a mountain will usually release precipitation as it rises along the side facing the wind and will move down the opposite side with dry air.

“Circle Around The Moon, Rain Or Snow Soon.”

People have long looked to the moon to provide insight into atmospheric conditions. As the old saying states, when the moon has a hazy ring around it, precipitation is on its way. The ring is caused by the presence of dust particles building up in the atmosphere. It means that a low pressure system is on its way, bringing rain or snow with it. As it passes through, the low pressure system will push the particles along.

When the moon appears clearly defined and bright, it is due to an absence of particles and moisture. This is characteristic of a high pressure system and the next day has a high chance of being dry. In the short-term, this is a simple and effective way to predict the weather.

For long-term or seasonal weather predictions, the phases of the moon can reveal clues. When two full moons occur in the same month, there is a higher chance of flooding. It is also said that when the tips of a crescent moon point upward and the moon looks like a bowl that can hold water, a dry spell is coming. When the new moon looks like a frown, or a bowl that water would spill out of, a wet spell is predicted.

The natural world is built to survive and living things will make adjustments in order to maintain life and produce offspring. Sometimes the changes are so subtle they can hardly be detected but there are some common plant and animal behaviors that reveal clues about the weather. When bugging out, you can use these clues to increase your own chances of survival.

How To Predict The Weather Using Plants

Upon waking, take a close look at the ground. Morning dew on the plants, while itself is wet, can actually be a sign of a dry day to come. A lack of morning dew can occur when dry winds have been pushed through ahead of a storm system bringing rain close behind. Of course, if it rained the night before, this will be more difficult to observe and you will need to look for additional signs in order to predict the weather.

The phrase “it smells like rain” has some truth to it. The moist air of a low pressure system brings out the scents of plants, as they release their waste under this condition, so the air will smell more pungent just before a rain. Swamps will also release gases during a low pressure system, making for a telltale sign that a storm is moving in.

Visual signs that it is time to prepare for wet weather are readily apparent in trees. The leaves of deciduous trees will curl upward in anticipation of a rainstorm. Pine cones will open their scales in dry air but close them in high humidity.

Plants also have the ability to foresee more long-term conditions and will adjust their growth accordingly. Crops, such as onions and corn, will grow thicker husks when a harsher winter is predicted in order to provide more protection to their seeds. Similarly, evergreens will produce larger, more robust pine cones, and acorns will form thicker shells- all to provide the seeds with a better chance of surviving extreme winter conditions. If you notice these signs, be prepared for a cold, long winter.

How To Predict The Weather Using Animals

The combination of heightened senses and well-developed instincts makes animals highly adept at sensing bad weather conditions. Be on the lookout for changes in feeding patterns, behavior, and sound level that may indicate rain is on the way.

Here are some specific examples of animal behavior that can be used to predict when a storm is coming: 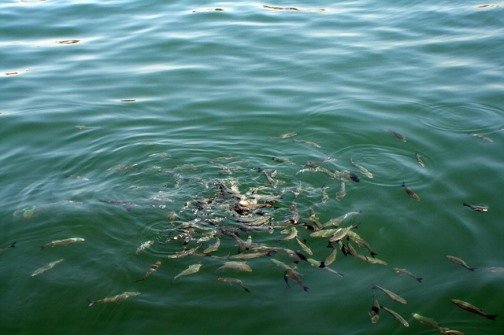 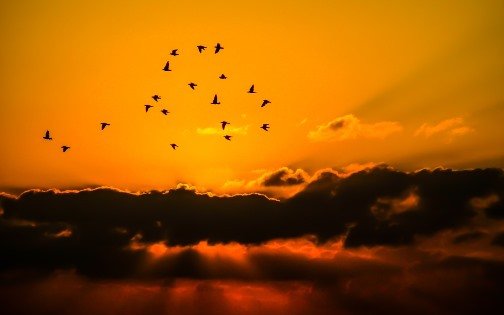 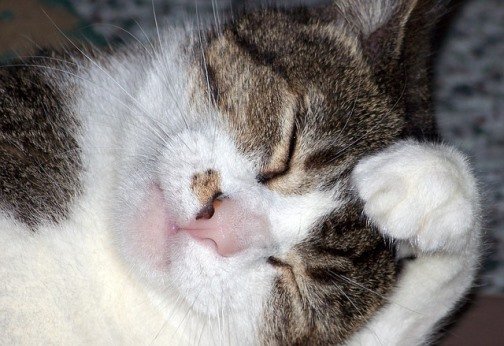 In addition to predicting major storms, animals can also sense long-term threats in the weather pattern. This information is highly valuable when preparing your bug out camp to withstand low temperatures and difficult conditions. A harsh winter means that food will be scarce and opportunities for foraging and hunting will be limited. 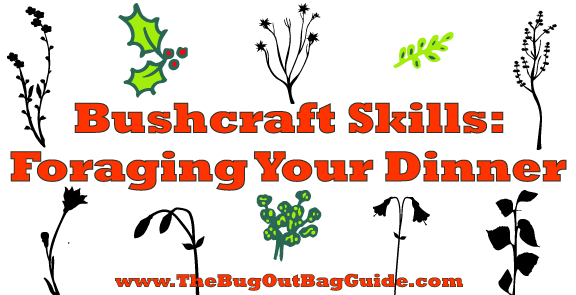 Depending on the amount of snow cover, it may be challenging to gather firewood. Keeping a fire going will be vital and your bug out party will need as many warm layers as you are able to find or make. All of these preparations take time, so the sooner you know, the better.

In general, if you notice extra thick coats of fur on domestic animals or local wildlife, expect dropping temperatures. Conversely, when their fur comes off in tufts, warmer temperatures are right around the corner.

If birds begin migrating earlier than usual, it is a sign of harsh winter to come. The brown section in the middle of a woolly bear’s body is also used to predict how harsh the upcoming winter will be; the thinner the brown stripe, the harsher the winter is expected to be. While there is not much research to back it up, a 70-80% success rate is pretty good for an old wives tale!

Farmers have even used cow fertility rates to predict whether there will be a drought the following year- a drop in fertility occurs in anticipation of a future water shortage.

Resources On How To Predict The Weather

To futher explore the topic of how to predict the weather using nature, check out these excellent resources on clouds, weather, navigating, and storms.

Click the image to view the book on Amazon.

Plants and animals have been “bugging out” and surviving in nature since the beginning of time. There is much to gain by observing their weather predicting skills and honing our own. When living in the natural world, a simple thunderstorm can be catastrophic if you are not prepared for it. Anticipating a harsh winter can help you ration supplies and apply your energy effectively so you have adequate food and fuel stored. Knowing how to predict the weather will help you to make wise decisions in favor of your survival.

Do you know any other ways to predict the weather in the wilderness? Have you been in a situation where knowledge of weather signs in nature benefitted you? Share your experiences in the Comments section below, thanks!

2 comments on “How To Predict The Weather In The Wilderness”