There are many places we can look to learn the skills and knowledge we need to help ourselves and our loved ones survive.  Often times one of the best teachers is the world around us.  I experienced this over the 7 years that I lived in New York City.  Living there provided many practical and at times terrifying lessons in urban survival and disaster planning that I hold on to today.  This was caused by the pervasive impact of the 2001 attacks as well as multiple events that occurred while I was living there afterwards.  In this article I am going to share with you some of the life changing events that I experienced and show how to apply the lessons learned to your own preparedness journey.

Growing up in the suburbs, New York City (or simply “The City” as we called it) was an entrancing place that children were taken to on field trips and whispered about by older siblings who managed to sneak down for a concert or night out.  It held great mystery and allure, there always seemed to be so much going on there.  It was common that a fair percentage of kids from my home town would end up there after (or instead of) college to pursue opportunities and adventure.  I myself took this path at the ripe age of 22, moving with a girlfriend (now wife) into a shoebox of an apartment as we both landed jobs in the financial sector.  I lived there for 7 years, from 2003-2010 and although I have since moved on a large part of me remains there and I loved the overwhelming majority of the experience.

The day of days

Anyone who is old enough to read these words will remember where they were on September 11, 2001.  I was as far away from the epicenter as I could have been, just 3 days into a 3 month exchange program in Australia.  I remember walking into the lounge room after a night out and seeing everyone glued to the TV.  It was early in the event and the newscasters were still calling it an accidental plane crash.  Then the other plane hit.  It flashed in my mind that I had an Aunt working in the WTC.  The distance from home could not have seemed greater as I ran to the phone and frantically dialed home.  My mother was in a panic and had not heard from her sister.  We spoke briefly as to not tie up the phone line.  We reassured each other that we were both OK and she promised to call as soon as she heard more news.  Hours later I got a phone call that my Aunt B had safely been evacuated from Tower 7, which later collapsed.  One small bright spot in an unspeakable day.  Growing up in the area I know many families that were not so fortunate.

It has been over a decade since that terrible day and New Yorkers have done what they can to grow past the events of 2001.  Not moved on, but perhaps grown scar tissue over the wound.  People go about their lives without living in fear and accept changes such as seeing more police and national guardsman in public locations.  Perhaps more subtle are the new physical changes that have cropped up.  For an example, we can look at the iconic skyscrapers that give New York City its distinctive skyline.  Most skyscraper office buildings have a large glass atrium on the ground floor.  This will nowadays be invariably surrounded by a picket line of heavy concrete barriers to prevent a truck ramming in with bad news in the payload.  Great pains have been taken to disguise measures such as this by planting trees or flowers in the barricades and most people would walk by them without even noticing.  This is the epitome of modern day NYC.  Be safe but keep living your life.

At one point during my tenure in NYC I was working in midtown Manhattan right around the corner from Grand Central Terminal.  This train station is one of the busiest commuter and subway stations in the world and its beautiful architecture and design make it a popular tourist destination (Personal note: if you ever visit NYC, stop by Grand Central.  It is one of my favorite places there).  All these things also made it a widely acknowledged soft target for terrorism.

One warm summer evening in July 2007 I was leaving work and in the elevator with several colleagues.  We experienced a shudder and a brief power outage.  When the lights came back on seconds later the elevator had stopped.  To break the tension, I made a remark “Well, I have lived a good life”.  Nervous laughter escaped and the elevator started moving again, taking us to the ground floor.

What we were met with was chaos.  We could see people out in the street literally screaming and running northwards past the front of the building.  I have burned into my memory a woman in a business suit and high heels running past me with tears streaming down her face saying over and over, “Not again.  Not again.”

We had no idea what was going in. We looked out the front door to see what they were running from and saw a large black cloud erupting front the middle of the street about 2 blocks away.  We joined the crowd moving northwards, calling our loved ones around Manhattan telling them we had just seen an explosion and they needed to move NOW.  This actually took convincing as more than one person said, “No one here is freaking out and we haven’t heard anything about it on the news”.

When I eventually arrived home I flipped on the TV and began to pack supplies.  After a few minutes I learned that the explosion had been caused by an underground steam pipe from 1924 that had burst.  Although it had not been ruled out, terrorism was seen as unlikely.  It ended up a couple people did die and many were injured regardless of the cause (see here for more info on the event).

That was it, a steam pipe bursting and it had sent everyone in the area into a panicked frenzy.  Part of this was lack of information and the location (right next to Grand Central).  But the other part was the scars of 9/11 that people still bore. 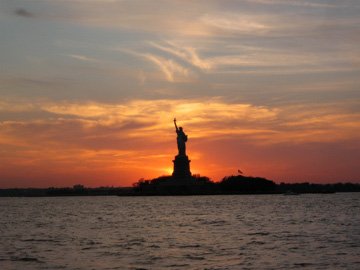 A Threat From Afar

One beautiful August Sunday afternoon in 2004 I was barbecuing at a friend’s place, relaxing and generally having a great day.  We were watching the game and it was interrupted by a news flash.

It was reported that a laptop had been found in Pakistan that included detailed plans to attack several financial institutions in our fair city. One of the buildings specifically listed was the Citigroup Center.  I had been working for Citigroup for a couple of years at this point and frequently worked out of this exact building.

I was frozen in my tracks.  Why would someone that I had never met want to kill me because I worked in a particular building?  To this day it makes no sense to me.

The response from the national, state, and local government was overwhelming.  Laura Bush actually came to the Citigroup Center to have lunch to show support.

I showed up to my office building on Monday not knowing what to expect.  I knew some people were planning on not showing up to the office until more information came out.  When I arrived what I was met with was, as I said, overwhelming:

The show of force helped inspire confidence in my fellow employees.  People could come to work knowing that others were working around the clock to keep them as safe a possible.  I never really got used to having to get my bag x-rayed and emptying my pockets before getting to my desk but it did help others reduce the spectre of violence from their everyday lives.  Once this was overcome people were compelled to outwardly show resolve and return normalcy to their everyday lives.

How Did I Take Action?

These events were a big a wake up call to me and my family members who either lived or worked in NYC.  We ended up putting together my first rudimentary bug out plan to be ready for whatever may come next.  To be honest, it wasn’t a very good plan but basic enough to work.  Thankfully we never needed it.  I will be going over this first bug out plan in another article in the near future, so keep an eye out for it for it!   I will highlight good points and areas for improvement in this original plan as well as show you how you can use my mistakes improve your own plan.

What to take away from it all?

There are some serious points and dark times discussed here.  However, I think it is important to say that in the 7 years that I lived in NYC, these never overwhelmed the amazing experiences and fantastic people that I met along the way.

This is what I think should be the big takeaway.  Although we are all a little more wary than we used to be and some things have changed we can NEVER allow this to run our lives.

By all means prepare yourself as best as possible and learn what skills you can to help you survive and protect your loved ones.  As I continue my own life’s journey I will certainly continue to do so.  But, I will also live, love, and learn a far greater amount of the time.  No matter what happens I will focus on the positives in my life such as my family and the friends I have made and adventures we have had rather than the dark moments.

Have you had an experience that has taught you an important preparedness lesson?  Please share it with us in the Comments Section below, thanks!

10 comments on “10 Preparedness Tips From Living In NYC”