Like many endeavours prepping can be engaging and exciting in the beginning but start to lose its luster as time passes and life’s priorities get in the way.  Some people make prepping their lifestyle and seek to live in an independent, self sufficient manner.  Others make their bug out bag and pull it out for a once over only when a big event catches their eye in the news.  Either way keeping that momentum going and instilling a permanent preparedness mindset will keep you ready for when you need to initiate your bug out plan and draw on your survival skills.  To help inspire the flagging wills of burned out preppers we have compiled this list of survival quotes to get you motivated.

1. The only easy day was yesterday 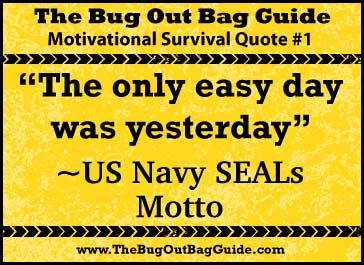 Basically every Navy SEAL ever.  This is their motto.

Every day is a new challenge and the only easy things are ones that are already completed.  If it was easy, they wouldn’t be sending The SEALs to take care of it.  Survival is the most difficult thing anyone can be called upon to do.  We are not accustomed to thinking about this because we are so far removed from day-to-day surviving in our modern world.  Being able to go to the grocery store and pick out a multitude of tasty foods that have travelled hundreds (or thousands) of miles without any effort from the consumer is truly a mind boggling thing.  However take this away and the unprepared person will turn desperate after missing 2 meals or less.  When you are relying on your own skills and wit to eke out your existence truly the only easy day was yesterday.  Every day in a survival situation is a battle for life itself.  Think of this when you are prepping, self preservation is the most motivating thing there is.

2. The guy on the street is sitting on his couch right now watching TV! 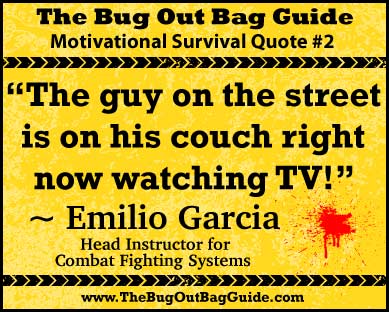 This is a personal one for me as I trained with Emilio for 5 fantastic years.  He would yell this at us when we were face down on a dirty gym floor, too exhausted to do any more pushups or when you were sparring and someone wanted to quit.  Comparing what we were doing – pushing ourselves to our personal breaking points – to what our potential adversaries in a street fighting scenario were likely doing at that moment – sitting on the couch watching TV – was extremely motivating.  We knew that the more we sweated in the gym to prepare, the less likely we would be to bleed in the street.  In survival prepping the comparison is obvious.  You are investing your time now on weekends and nights after putting the kids to bed so that when you need to survive, you will be prepared.  Are you the person in the gym or the guy on the street?

3. I have not yet begun to fight 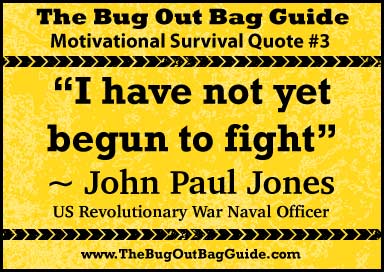 John Paul Jones is one of the most celebrated Naval officers of the American revolution and with good reason.  In addition to capturing multiple enemy vessels and leading daring raids on both British Controlled Nova Scotia and England’s home shores he drew enough animosity from the King to be labeled a pirate with the likes of Blackbeard!  Jones gave us this quote during a battle off the Scottish coast in September of 1779.  Although his ship, the Bonhomme Richard was burning AND sinking when told to surrender by the British commander he replied that he had not yet begun to fight!  He proceeded to whip the British fleet and accept their surrender within 3 hours of his response.  Moral of the story: when faced with dire odds dig deep and trust in your own abilities and skills.  You have prepared long and hard for the challenges ahead and you CAN overcome them. 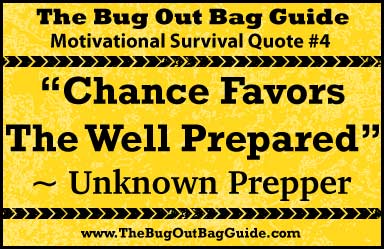 Unknown, surely they were a prepper though.

With all the chaos and uncertainty in the modern world it is impossible to predict what may come.  However if there is a terrorist attack or natural disaster in your area, it is the people who have prepared for it who will fare best.  Prepping is an investment in your future.  When you need to survive that investment pays off big time. 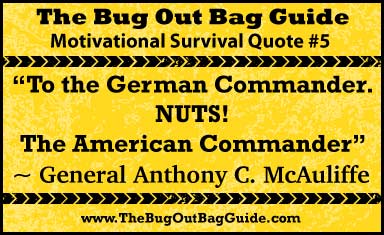 General Anthony C. McAuliffe, in response to the ultimatum of surrender from the German commander during the WWII Battle Of The Bulge

On December 22, 1944 the American troops fighting around the town of Bastogne were encircled by German infantry and armor.  Recognizing his advantage the German commander of these forces sent a polite but forceful request to the American commander, General McAuliffe demanding that he surrender honorably or face annhilation.  General McAuliffe’s response was as terse as it was defiant, “NUTS!”.

The American troops managed to hold out under the brutal onslaught that followed until the 4th Armored Division arrived on December 26th to provide reinforcement.

This act of defiance can be a lesson to us all that even when all hope is lost there is still a way to survive.  Remember this when preparing your survival plan and developing your skills, it may be that your strength of will alone carries you and your loved ones through your next ordeal. 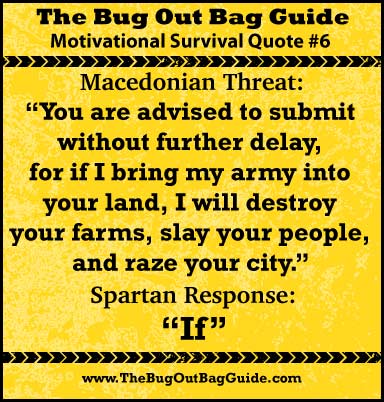 When King Philip II of neighboring Macedonia was preparing to invade Sparta he sent the following message, “You are advised to submit without further delay, for if I bring my army into your land, I will destroy your farms, slay your people, and raze your city”.  The Spartans responded with the gusto of the fearless with a simple, “If”.  King Philip ultimately chose not to test the Spartan’s will and moved on to easier conquests.

We could look to the Spartans for many inspirational survival quotes.  Although lesser known than the infamous “Molon Labe” (Come and take them – referring to his army’s weapons) Spoken by King Leonidas (of 300 fame) “If” equally demonstrates the Spartan’s both willingness to fight and confidence in their preparation and training.  We should all strive to reach this mindset in our prepping.  No matter what the threat – terrorism, home invasion, earthquake, or whatever else – IF it happens we are prepared to survive. 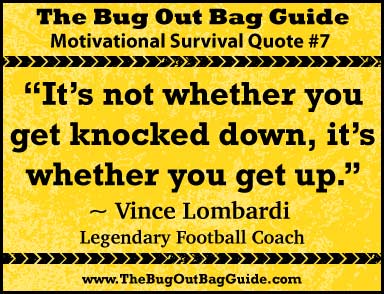 Coach Lombardi would say this to his players as a means of inspiring toughness and resilience in their mindsets.  It is a fantastic approach to disaster preparedness planning and many other aspects of life.  A survival scenario is dynamic and unpredictable by nature, there are going to be setbacks.  Set up your bug out plan to overcome these setbacks.  Develop your survival skills to be able to solve any problems that may be thrown your way.  You are likely to get knocked down in a survival situation mentally and possibly literally.  Be prepared to get back on and keep moving forward.

8. Out of every one hundred men, ten shouldn’t even be there, eighty are just targets, nine are the real fighters, and we are lucky to have them, for they make the battle. Ah, but the one, one is a warrior, and he will bring the others back. 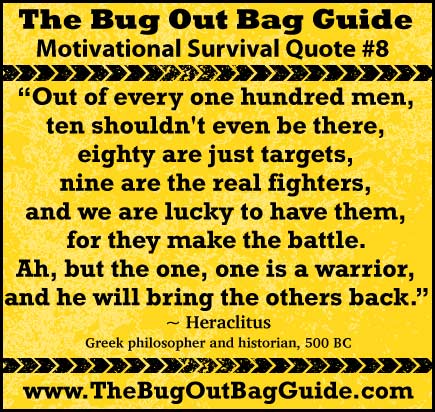 Heraclitus, Greek philosopher and historian, 500 BC

While one of the lengthier survival quotes it is also a personal favorite of mine.  While Heraclitus made the statement in reference to an army it is applicable to many situations.  Next time you are in a crowd look around and think about this quote.  How many of the people present are ready to survive should an emergency occur?  How many will panic?  How many will not know what to do?  Are you the 1-in-100 that will survive and thrive when the time comes or are you one of the 80 targets?  Your prepping and learning of survival skills should turn you into the warrior that brings your loved ones back.

I hope you liked our survival quotes.  If you are motivated to start building your Bug Out Bag click thru to our Custom BOB List Building Tool below!  This will let you pick what you want in your BOB from a list of survival gear, check the estimated weight, and then email the checklist to your inbox, all for FREE!  Click on the button below to give it a try:

What do you think of these survival quotes?  Do you have any survival quotes that you would like to share?  Please let us know in the Comments Section below.